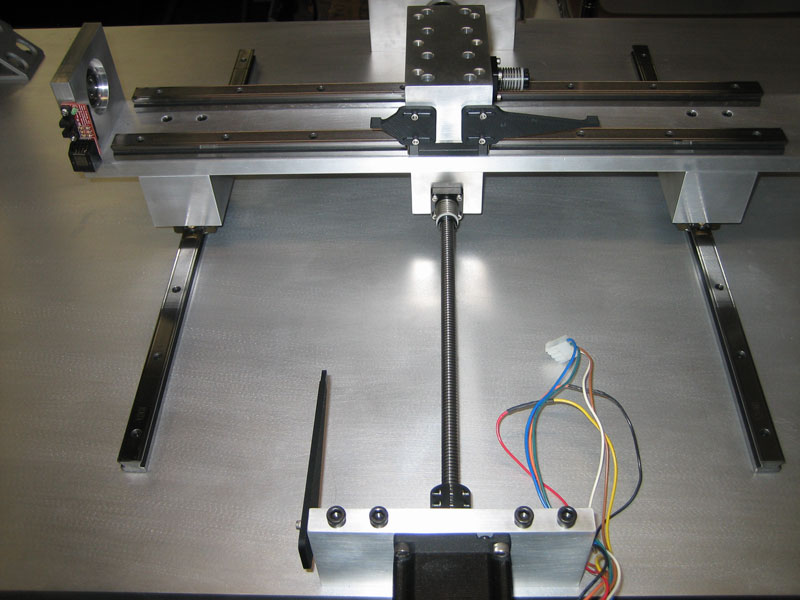 Above you can see the ACME lead screw with the anti-backlash nut. The thread size initially was 3/8″-12, 1-start on all axes (as pictured here) but was later changed to 3/8″-8, 2-start. This increased the speed of the X and Y axes three fold. It is attached to the NEMA 23 stepper motor via a shaft coupling. This shaft coupling has one side threaded in order to better secure the acme screw. You can see in the the below image that that on the other end of the acme screw there is a shaft collar which is pressed right up against the bearing in the bearing mount block. There is also another shaft collar pressed up to the other side of the bearing. What this does, is it takes a majority of the load off the smaller internal bearing in the stepper motor and puts it on that big 3/8″ bearing, thus reducing wear on the motor. 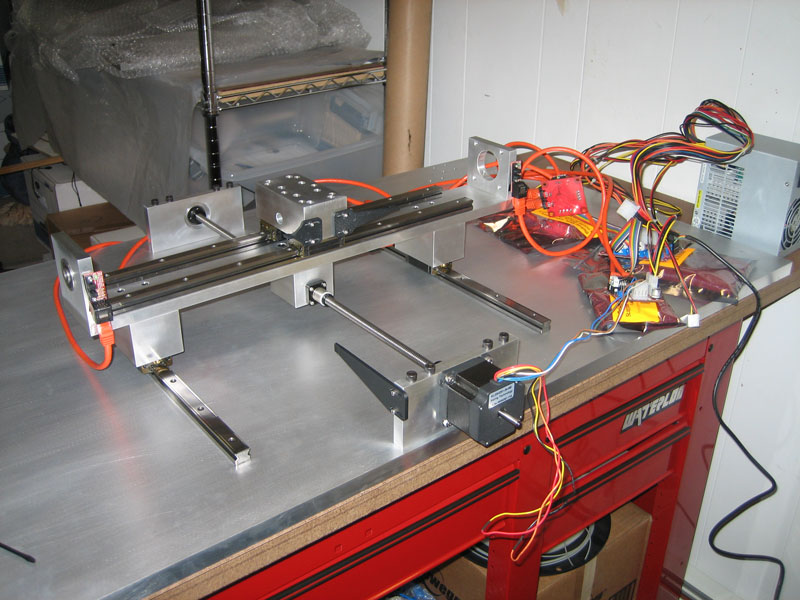 Testing of the X axis with the 3rd generation RepRap electronics was successful. As you can see in the pictures there are optical end stops at each end of the Y axis. The end stops for the X axis are actually mounted on the underside of the Y axis. The flags for the end stops are the adjustable black plastic parts that were actually printed on a commercial 3D printer. I could have printed them on the machine itself once I got it running, but I did not want to take the risk of having no end stop protection until then.

Next up was assembling the X and Y stages. These stages are stacked on top of one another. This configuration does lead to some tolerance stacking issues when squaring the build plate to the Z axis. I will cover that more in a subsequent post. 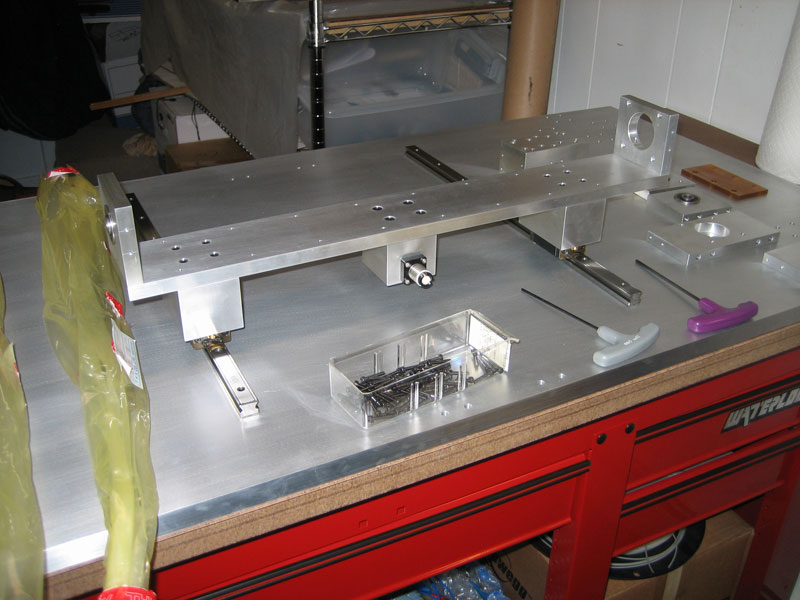 The Y axis stage was fastened to the linear bearing blocks with aluminum spacer blocks in between. This spacing provides just enough clearance for the X axis motor and lead screw. I wanted the X and Y axes to be seated as close to the table as possible because as the further these stacked stages are positioned off the base table, the more vibration and tolerancing issues will occur. In the center of the image above, you can see the anti-backlash ACME nut mounted to its respective block. All through holes for screws are counter bored in the Y axis plate to allow for enough clearance of the Y axis linear rails. On the left is the bearing mount block and on the right is the NEMA 23 stepper motor mount. 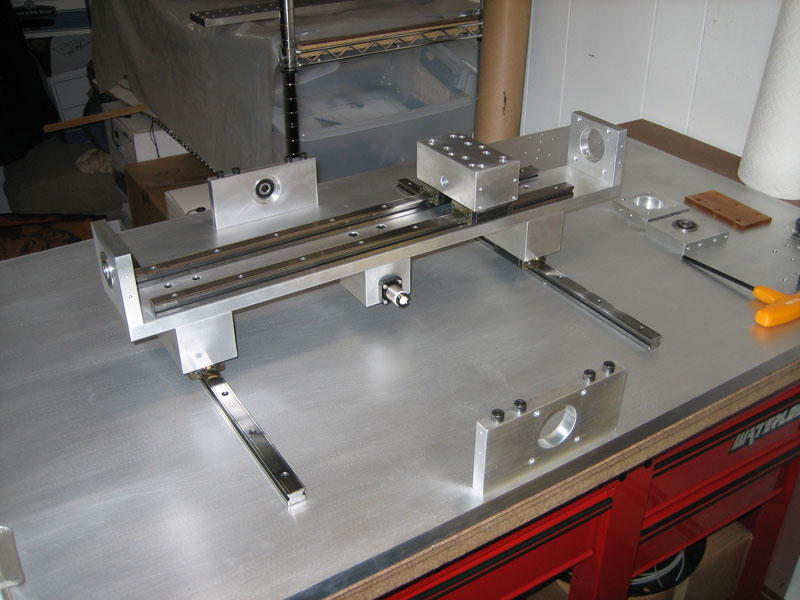 Once the Y axis stage was secured, another matched set of linear ball bearings were attached. The spacing of these rails is much smaller than the X axis rail spacing. This decision was a balance between the stability of the build plate (further apart = more stable) and the axis maximum travel. The Y axis carrier block is fastened to the two rails and the build base will be attached to this block. The X axis NEMA 23 motor mount and bearing mount block are fastened directly into the aluminum table.

All axes on the machine are driven by ACME threaded lead screws. One end is attached to a NEMA23 stepper motor via a coupling. The other end is supported by a 3/8″ double shielded ball bearing in a mounting block with thread clamps on each side, to further reduce backlash. 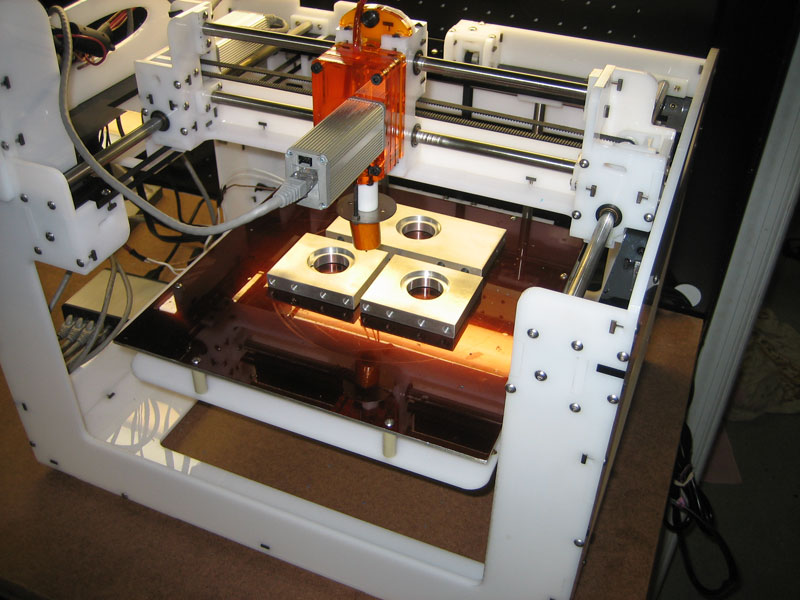 The ball bearings and the bearing mount blocks have a very slight interference fit. So I thought “why not heat up the blocks on the Fab@Home heated build base?” They were heated to around 100°C in order the expand them. The bearings were placed in the freezer in order to shrink them a little. This made it slightly easier to get the bearings to fit into place. I ended up using an Arbor Press to get the bearings flush into the block. When using the press I made to sure to exert the force on the outer casing of the bearing, in order to keep the load from being directly placed onto the ball bearings themselves. 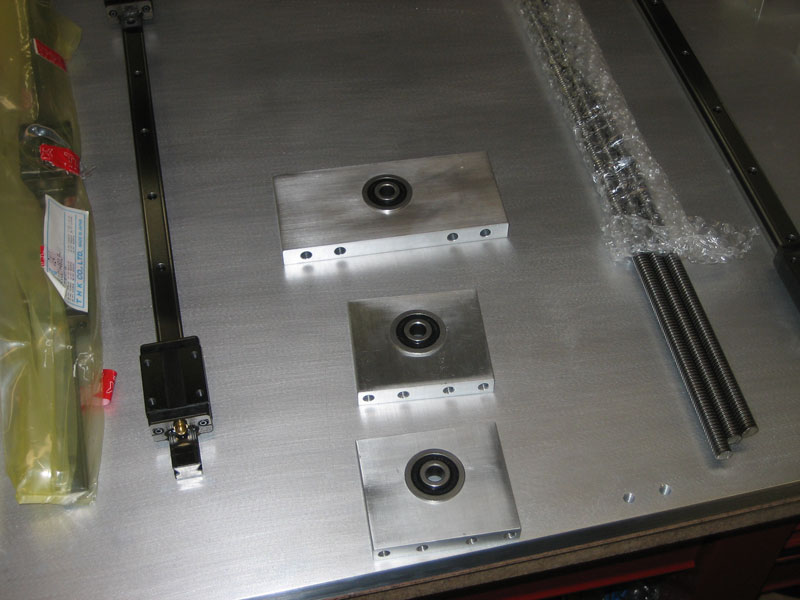 Ball bearings press fit into their respective mounting blocks, next to the ACME threaded rod

These blocks will be fastened into position. From the above image, the top block will attach into the base table while the other two smaller blocks will either attach to the Y or Z axes (they are basically the same design). I did not turn down the ends of the ACME threaded rod as is common with linear motion stages. This is because I purchased couplers and thread clamps that are threaded to my ACME size. So this saves a little bit of time by avoiding another part that needs to be machined, also having threaded clamps and couplers will hold my lead screws in place better.